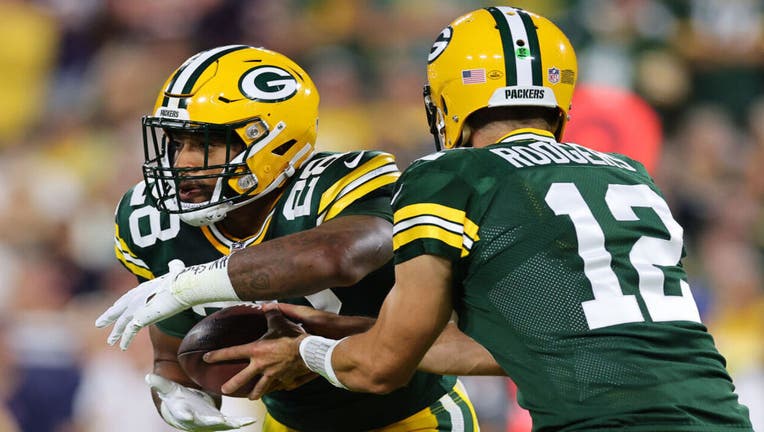 GREEN BAY, WISCONSIN – SEPTEMBER 18: Aaron Rodgers #12 of the Green Bay Packers hands the ball off to AJ Dillon #28 against the Chicago Bears at Lambeau Field on September 18, 2022 in Green Bay, Wisconsin. (Photo by Michael Reaves/Getty Images)

GREEN BAY, Wis. – The Green Bay Packers earned their first win of the year, a 27-10 victory over their rival, the Chicago Bears. FOX6’s Lily Zhao went one-on-one with Packers running back A.J. Dillon to get his thoughts on how the team responded after a tough season opener and what to expect in a big Week 3 matchup.

“Hey, 12 said it best,” said A.J. Dillon. “Anytime you can get a win in this league, no matter who you’re playing, it’s not easy, so you got to be able to celebrate that for a little bit. Very short time. We got a game this week, but to come away with the win, especially against a rival at home, you got to celebrate and give credit where it’s due.”

FOX6’s Lily Zhao: “So Matt LaFleur emphasized that 23 combined touches for you and Aaron Jones is not enough. When you heard you guys were being featured, what’s it like knowing you have a load to carry on the ground?”

“I think both of us looked at each other and shrugged our shoulders and said, ‘We’re ready to go,'” said Dillon. “Whether they only need us to touch the ball five times or 50 times, we’re ready whenever our number is called. I think in our running backs room, it’s something our Coach Ben Sirmans talks about a lot. Whenever we need to be out there and answer the bell, we’re ready to go.” 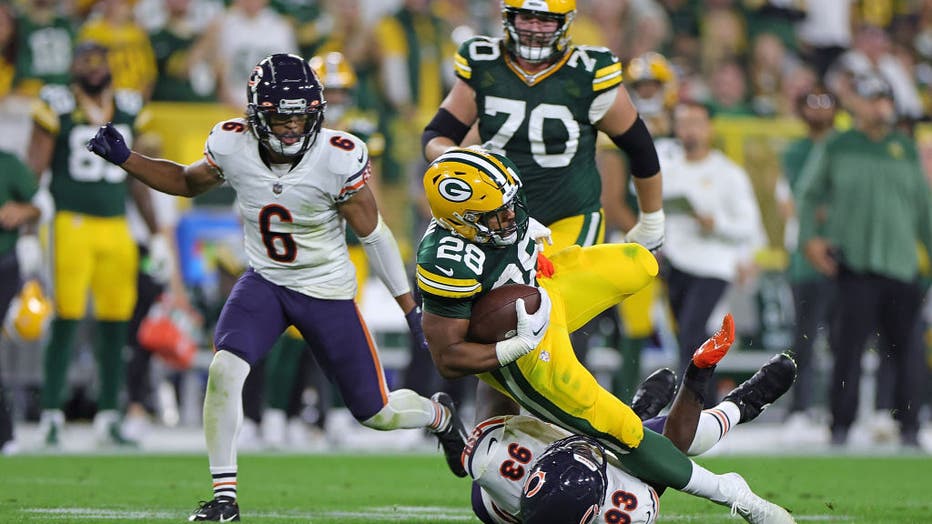 GREEN BAY, WISCONSIN – SEPTEMBER 18: AJ Dillon #28 of the Green Bay Packers is brought down by Justin Jones #93 of the Chicago Bears during a game at Lambeau Field on September 18, 2022 in Green Bay, Wisconsin. The Packers defeated the Bears 27-10. (

FOX6’s Lily Zhao: “I don’t know if you saw the picture of Aaron with the ball, second touchdown. You’re in the front. What’s it like being a lead blocker because you really led the way for his second touchdown.”

RELATED: Check out the new and improved FOX Sports app

“It’s awesome, and it’s a lot of trust,” said Dillon. “You know, I don’t think people talk about it enough. All the credit. Our offensive line, our receivers and tight ends do blocking for us. Nothing would happen for us if it wasn’t for them. It was really cool for me to be on that end of it and, obviously, block for one of my best friends in Aaron Jones. I had to talk to him a little bit because he didn’t celebrate with me right after so next time, we’ll have a plan.”

FOX6’s Lily Zhao: “When you’re looking at next week, Tampa Bay, on the road, it’s going to be Aaron Rodgers and Tom Brady. For you guys in the running back room, what’s it going to be like taking on this Bucs defense?”

“On paper, they’re a great defense, got a lot of talent, especially with their linebackers,” said Dillon. “All across the board, it’s a playoff-caliber team, Super Bowl-contending team that they got, so anytime you’re playing against a defense like that, especially on the road, you really got to hone in, get back to your fundamentals. I’m looking forward to that as a competitor. It’s awesome to go against a team like that.”