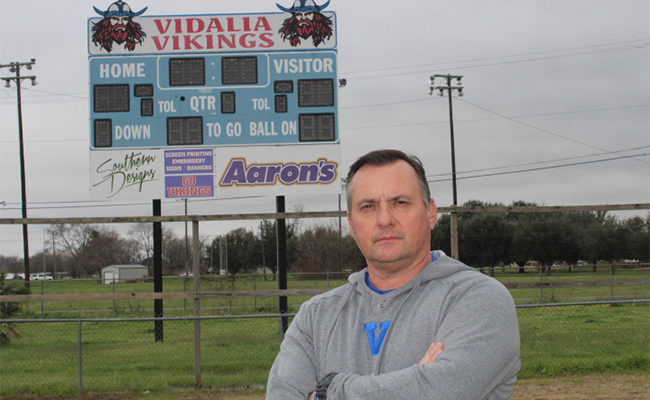 VIDALIA, La. — The Vidalia High School Vikings came back from a big double-digit deficit in the first quarter to defeat the Cedar Creek School Cougars 30-29 in their home opener Friday night at Dee Faircloth Viking Stadium to remain undefeated.

Vidalia senior quarterback Sema’J Hayes had a 55-yard touchdown run early in the fourth quarter and a five-yard TD run with about 4:00 to go that made a 29-28 game. The Vikings were successful in their two-point conversion run to put them up 30-29. Then it was up to the defense to make the improbable comeback a reality.

“They got the ball with about 2:00 to go and we held them to a four-and-out and were able to run the clock out,” Vikings head coach Michael Norris said. “Our defense came out and did what we needed them to do. They got some big stops.”

After getting down 22-0 in the first quarter, it looked like any thought of a miraculous comeback was not in the offing. However, Vidalia would not let Cedar Creek get too comfortable after the Cougars jumped out to such a big lead.

“We went into halftime down 22-8. We had a couple of kids step up and challenge our team to fight. Keep fighting,” Norris said. “We gave one score in the second half. Then we scored 22 unanswered points. Offense came out and put some points on the board.”

Vidalia (2-0) will make the short drive to Jonesville, La. to take on the Block High School Bears next Friday with kickoff at 7 p.m. Block fell to 0-2 overall after being shut out by Grant High School 57-0.