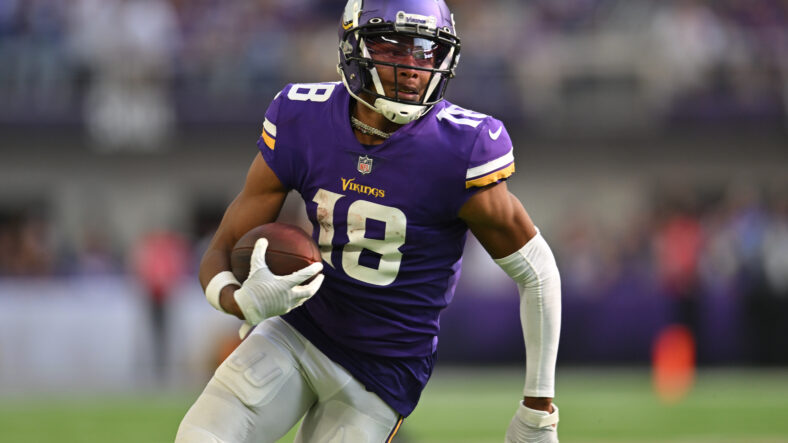 It only took one game for two Minnesota Vikings personalities to command national attention via end-of-season award projections.

After defeating the Green Bay Packers in Week 1, 23-7, new head coach Kevin O’Connell became the odds-on favorite to win the NFL’s Coach of the Year award. Meanwhile, Justin Jefferson climbed to the top of bettors’ attention for Offensive Player of the Year.

O’Connell recorded the victory in his first career game as a head coach, downing the primary division rival in the Vikings building. In doing so, Jefferson notched a career day, tallying nine receptions for 184 yards and two touchdowns. Jefferson was also a toenail away from three touchdowns, almost like Kevin Durant on the three-point line versus the Milwaukee Bucks in 2021. But the referee rightfully noticed Jefferson was out of bounds, keeping the total to a mere two touchdowns.

According to RotowireO’Connell shot to the top of the Coach of the Year race, holding +800 odds to win the award after the win over Green Bay. Behind O’Connell [and not by much]Brandon Staley (Chargers), Brian Daboll (Giants), and Mike McDaniel (Dolphins) fill out the top four.

The NFL evidently wants to grant the award to a first-year skipper, at least per Vegas’ estimation.

Like O’Connell, Jefferson’s chances to win Offensive Player of the Year hit the top of the ladder. After Week 1, he slightly outpaces Colts RB Jonathan Taylor for OPY odds, with Jefferson at +650 and Taylor at +850. Heading into the 2022 season, those probabilities were essentially flipped as Taylor led the pack.

Jefferson is also now a fringe MVP candidate, per sportsbooks, with +8000 odds to win MVP. But he isn’t the most likely Viking to earn the MVP trophy. That’s Kirk Cousins, whose MVP odds rose from +5000 to +3000 after beating the Packers.

The news is encouraging for the Vikings, who doubled down on the Cousins era after hiring a new front office in January. Minnesota could’ve traded Cousins to a team like the Carolina Panthers, effectuating a full foundational roster rebuild. New general manager Kwesi Adofo-Mensah chose otherwise, though. He re-upped with Cousins and built a roster ready to “win now.”

And that’s what the Vikings did against the Packers in Week 1, increasing the odds of the head coach and wide receiver winning some 2022 hardware.