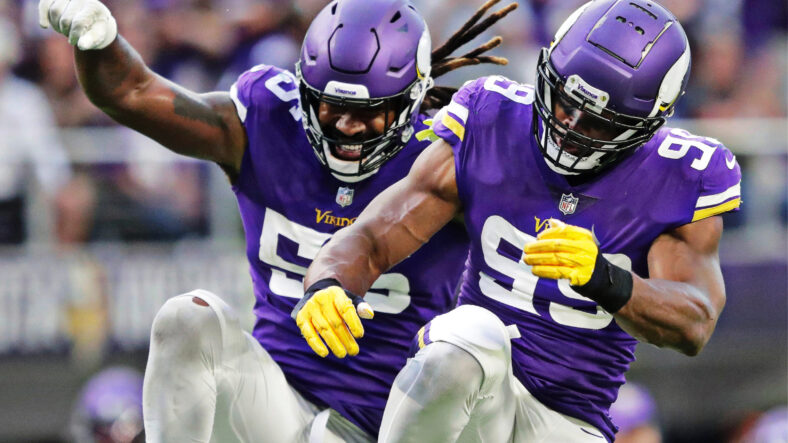 The Vikings’ front office spent significant resources to bring in Harrison Phillips and Za’Darius Smith this offseason. From March through the preseason, we discussed how good this defensive front could be. The Vikings Defensive front lives up to the hype in their debut.

We knew how good the defense could be with the additions of Phillips and Smith. Couple this with getting Danielle Hunter back and healthy, and it could be really good. In the opening game against division rivals, they rocked it.

What a day for Dalvin Tomlinson. He was an absolute game wrecker in the pass rush and the run game. Tomlinson posted a PFF grade of 83.8, which was the highest for the defensive line. He also tied for the 3rd highest pass rush win rate at the defensive tackle position.

Throughout the offseason, there were all sorts of hype around Smith and Hunter, for good reason. However, if the Vikings can see this type of success from Tomlinson from the tackle position throughout the season, watch out. This defensive front just might be the best in the NFL.

Horrible Harry is everything we had hoped he would be. This man is a menace in the middle of the front. His ability to hold the point of attack and penetrate helped to make some significant stops. There was one particular play on the goalline that was outstanding.

Phillips stunts the other side of the center and eats a double team allowing Kendricks to penetrate. The center is forced to come off the double team to block Kendricks, which frees up Phillips to get in on the run stuff. This is the type of play we should come to expect. He is a monster, and we should love it.

Vikings EDGEs Back to an Elite Level

Danielle Hunter is back. Holy moly, was he good. Hunter posted a PFF grade of 68, which seems pretty low, considering his state of play. However, PFF grades are not everything. Sometimes it is about what is not seen. This pass rush below is all I need to see to make my (albeit, homer) opinion about Hunter.

Is there really anything more that needs to be said? Hunter is going to have offensive tackles on ice skates all year. Albeit, this is a backup tackle who has no business being one v one against Hunter. However, Hunter has put great tackles through the wringer before. Expect this all year.

Oh my goodness, is Za’Darius Smith exciting to watch or what. He came into this game with a public grudge against the Packers, and he made his presence felt early and often. While he posted a pretty bad PFF grade of 55, that is not what I care about.

His presence is about getting him on an island against an inferior offensive lineman and letting him work. That is exactly what the Vikings did. Just look at this man’s bull rush.

We, as Vikings fans, are all too familiar with seeing this from Smith. He seemed to do this to us at least twice a game when he was playing for the Packers. I can’t wait to watch him do this all year long.

It’s Time to Temper Expectations (or not)

Although it is easy to be excited about this front, we still need to temper expectations. This Packers offensive line was not very good and was missing their two starting offensive tackles. Next week, the Vikings will play a much better Eagles offensive line. Let’s wait to see how they play.

However, if they play as they did on Sunday, we should see a whole lot more of this.

Mitch Massman is a life-long Vikings fan. His first heartbreak was the 1998 NFC championship game. His full-time job is as an economic development professional in rural Minnesota. He fantasizes about the Vikings winning a Super Bowl one day, but until then he will write about the Vikings. Follow him on Twitter @skol_vikings3