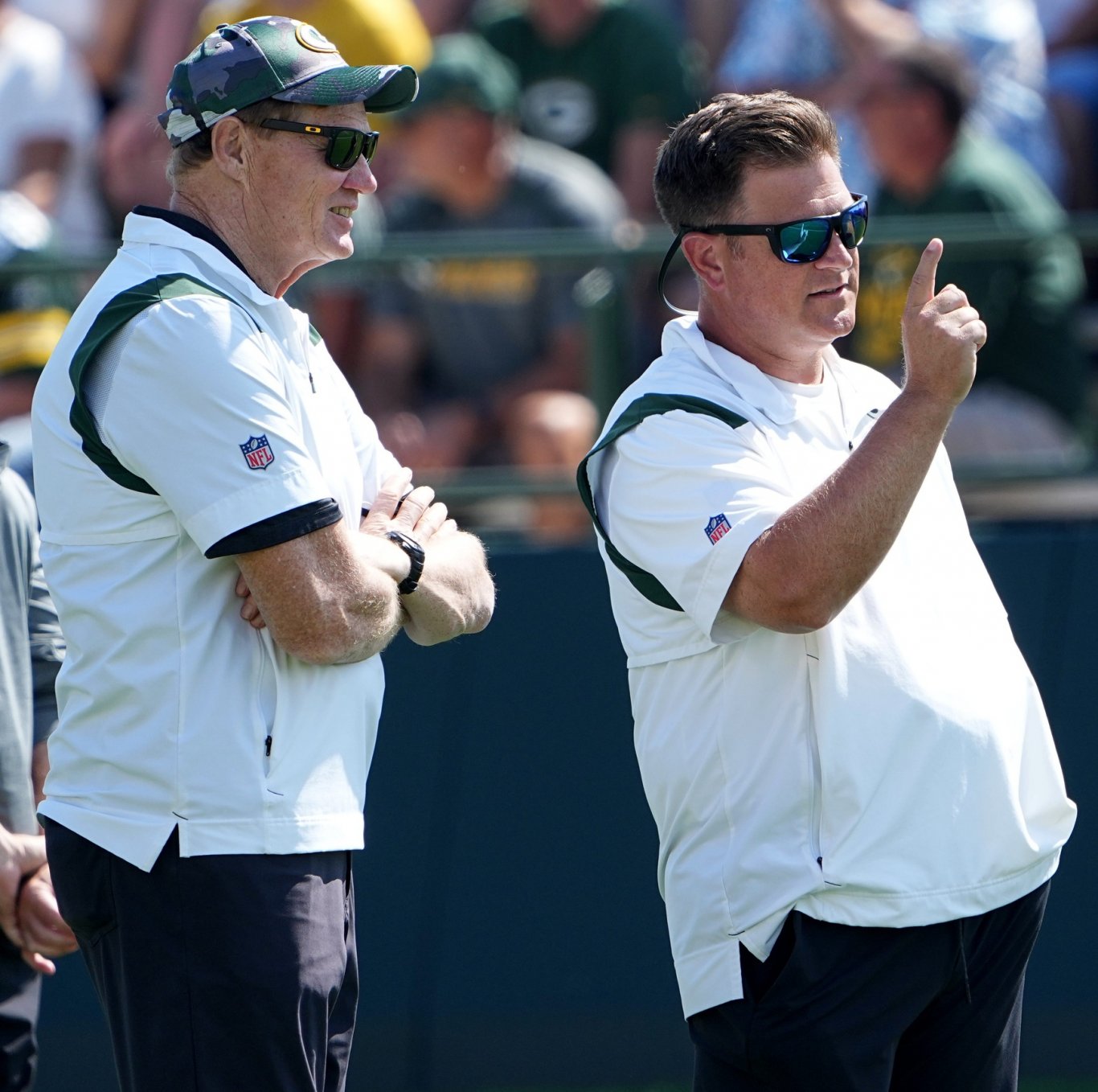 Teams know that other costs will crop up, many of which can vary widely.  Injuries, incentives, not-likely-to-be-earned incentives and game active bonuses that actually end up getting earned by the players plus elevations from the practice squad to the game day active roster all factor in.  Robert Tonyan has a game active roster bonus of $1.515M ($89,117 per game).  If Tonyan plays all 17 games, his cap number will be $802K more than is currently budgeted for him.  The same analysis applies to Randall Cobb who played 12 games last year (possible $242K extra in game active bonuses), Bakhtiari ($600K – he’d count for an extra $565K if he plays the remaining 16 games), and Douglas ($133K extra after playing 12 games last year).  It turns out that if the Packers have great health this season they would have to pay $1.9M more than budgeted just for game active bonuses.  If the Packers have bad luck on the injury front, they could pick up cap space at the cost of losing good players.  Note that game active bonuses count against the cap the moment they are earned.  When Bakhtiari plays his 2nd game, the Packers cap space will go down.

Elevating two players every week means an extra cost, usually about $53K per week for two players, but it depends on which two and their contract status.  That times 17 weeks is $940K more than budgeted.

The Packers know the possible incentives in their players’ contracts, but that information is not always public.  For instance, Preston Smith could have earned $750,000 more if he had been credited with one more sack.  It is probable that several other players have incentives that we do not know about which they might or might not earn.

$15,819,529, per Ken Ingalls.  We can deduct the $3.312M for the PS and what turned out to be $1.43M for the 52nd and 53rd players to get $11.08M net after cut downs to 53, which becomes the more useful number.  The Packers made a significant player acquisition when they signed Dallin Leavitt for $1.191M, as that is $486K more than a rookie.  The Packers’ cap space fluctuated by a few hundred thousand during the cut downs from 90 to 85 which occurred on August 15, but their cap space was still $15.689M on August 18th.  The Packers placed Osirus Mitchell on IR on August 11 at a cost of $430K (he had a split contract).  The team waived-injured Kicker Gabe Brkic on the 15th, but picked up a little when they released a relatively expensive player in Dominque Daffney on August 17th.

The Packers waived-injured and later placed Malik Taylor ($895K) on IR on August 23, followed by Vernon Scott ($915K) and Danny Davis ($430K) on the 24th.  They also moved Kylin Hill ($474K) from the active PUP to the reserve PUP.  Hill doesn’t cost any more or less but the move to the reserve PUP means he no longer counted against the 80- man roster (and the 53-man roster), so the Packers signed a different player whose cost did count.  The Packers also  signed Rudy Ford for $997K on August 31.  He cost about $295K more than a rookie would have.

To get down to 53, the Packers waived-injured Nate Becker, Ismail Hyman, Alize Mack, Shawn Davis, Innis Gaines and Akial Byers.  That left the Packer with a whopping 10 players on IR and one on PUP, as shown in the table below:

$5,877,988 per Ken Ingalls.  The NFL previously had been forcing teams to take $849K as a placeholder charge for per diem workout charges (not to be confused with workout bonuses in 2nd contracts of some players).  It turned out that the actual cost to the Packers was $493,521, so the Packers gained $355,479 in cap space.  Over the next week, some players reached injury settlements, such that the Packers’ cap space officially had increased to $6,777,710, per a September 8th tweet by Field Yates.

$8.459M.  By September 11, the Packers had $8,459,876 in cap space, having made some personnel moves and having removed several players from IR after having disbursed a couple of hundred thousand in injury settlements.  Krys Barnes was injured in game one, and the Packers placed him on the IR on September 13.  His cap number is $895,000.  The Packers signed Caleb Jones to the 53-man roster.  Jones will count $665,833 plus another $11,500 he earned for being on the PS for week one.  As of September 15, the Packers cap space stands at $7,429,597, per Ken Ingalls.  If you want to follow along, you can check the twitter feed of Ken Ingalls by clicking here.

The Packers still have Scott ($915K), Taylor and Barnes ($895K each), Brkic and Mitchell ($430K each) on the Injured  Reserve ($3.565M altogether).  Barnes could return in 4 weeks, but his high ankle injury looked bad.  Scott, Taylor, Brkic and Mitchell cannot be designated to return from IR because they did not make the initial 53-man roster.  When these players can pass a physical, the Packers should gain some cap space.  The Packers will not gain $3.56M since they have already earned one week’s pay and I have no way to know exactly how severe their respective injuries are in order to forecast how many more weeks of pay they will end up getting.  Scott, Taylor and Barnes each earn $49K for each week they are on the IR (~$150K/week).  Brkic and Mitchell each earn $23,888 for each week they remain on the IR ~$50K/week).  These five players therefore earn almost $200K per week that they are on the IR.

HOW MUCH CAN THE PACKERS SPEND FOR THE REST OF THE YEAR?

A little.  I think the Packers need to keep $1.3M available for the game active bonuses.  Tonyan alone might earn just over $800K more than his cap number if he plays all 17 games.  Bakhtiari may look dubious, but his cap increases by $35K for each game he plays after the first one.  I am not sure whether the Packers misjudged his medicals, but everything they have done makes it seem like they don’t expect him to miss more than the first 4 games.  If he plays 11 games (that is, missing the first 6), his cap number would increase by $353K.

Injuries are a crapshoot and calculating the cost is not intuitive.  For example, if Lowry went on season ending IR in week 6, the cost would not be his cap number, or the cash paid to him, but rather the cost of his replacement, which would likely be Jack Heflin at $825K/18 weeks or $45,833 per week, times 12 weeks, which equals $550K.  Chris Slayton would be a $470K cost in that scenario.  That’s what elevating a player with zero or one credited season for 12 weeks would cost if the injured player had no game active bonus (and stayed on the IR for the remainder of the season), which describes 38 of the 53 players currently on the roster.  Since Lowry has a $400K game active bonus, he would earn almost $259K less, offsetting the cap space loss by that amount.  I would keep $3M in the kitty while hoping that Mitchell, Brkic and Turner heal sooner rather than later to gain back a million to two million more.  Down to $2.45M to $4.45M available to spend.

I am sure the Packers will have to pay some incentives and will want to roll over some cap space into the 2023 league year.  Those two categories might easily add up to all of the remaining available to spend cap space, but it would be a pure guess on my part to assign a number.  That is why I suggested in a recent article restructuring Lowry to the tune of $3M or so and Lazard for $2.4M to generate some cap space in case Gutekunst can’t pull rabbits out of hat like he did last year mid-season with Rasul Douglas.  If the Packers need a guard, an offensive tackle, a #3 OLB, or a defensive back, they might have to have millions in cap space to acquire such a player or players.

I am going to use the phrase Cap Melt instead of Churn since churn is confusing.  Gutekunst does a good job churning the bottom of the roster, but that is not the same thing as the reduction in cap space over the course of a season I am going for.  If I recall correctly, as of game one in 2021, the Packers had almost $7.8M in cap space and ended the season with $2.891M.  That would mean that $4.9M melted away from game one to the end of the league year.  The Packers had some important players end up on IR, but the quality of the player or even how much they get paid does not affect Cap Melt since the cost is the cap charge to replace the player, usually from the PS or by a cheap street free agent.  How many players end up on IR for extended lengths of time is more important.  The Packers acquired Jaylon Smith, Whitney Mercilus, and Rasul Douglas mid-season, but those were not splashy (that is, expensive) moves like signing Odell Beckham for $4.75M in cash would have been, even though two of those moves worked extremely, even ridiculously, well.