The Green Bay Packers are angling for their fifth-straight NFC North title in 2022. The biggest difference between this campaign and the last four for Aaron Rodgers and company, though, is that wide receiver Davante Adams won’t be part of it. The Packers trade that sent Adams to the Las Vegas Raiders left a hole in Rodgers’ offense. Other players on the Packers roster like Allen Lazard and rookies such as Christian Watson and Romeo Doubs were supposed to fill this hole but, heading into Week 1 vs. the Minnesota Vikings, no Packers wide receivers have fully stepped up.

Head coach Matt LaFleur and general manager Brian Gutekunst won’t address the WR issue before the season or, likely, even during it. That doesn’t mean they shouldn’t. On the eve of the 2022 NFL season, here is one unrealistic Packers trade the franchise actually needs to pull off.

The unrealistic Packers trade that should happen

In eight seasons with Aaron Rodgers and the Green Bay Packers, Davante Adams posted 669 catches for 8,121 yards and caught 73 touchdowns. Just last season alone, the All-Pro put up an incredible 123 grabs for 1,553 yards and scored 11 TDs.

By comparison, Allen Lazard, Randall Cobb, and Sammy Watkins (on the Ravens last year) —along with rookies Christian Watson and Romeo Doubs, who put up no NFL stats last season — combined for 95 catches, 1,282 yards, and 14 TDs in 2021.

Yes, Lazard is just 26 and could grow into a greater role. And Doubs, a fourth-round pick, does seem like a breakout talent. However, heading into the season, it’s impossible to say that Aaron Rodgers has a true No. 1, go-to guy on the Packers roster.

The Packers trade that could remedy that is making a deal with the Seattle Seahawks for DK Metcalf.

Despite coach Pete Carroll’s eternal optimism, the Seahawks are going to be bad this year. And, even with a highly-drafted QB in 2023, will likely be bad for another few seasons. Despite this fact, the Seahawks refused to trade Metcalf this offseason, instead giving him a three-year, $72 million extension.

That’s all well and good, but by the time that contract is up, Metcalf will have spent four years of his prime on losing teams. He needs to get out.

The Packers don’t trade draft picks, and it would be strange to trade for a WR after letting one get away. That said, Metcalf is five years younger than Adams and is a completely different style of receiver. A giant, lightning-fast wideout like Metcalf is something Aaron Rodgers has never had, and the two would work well together.

This Packers trade would be a win-win-win for the Seahawks, Metcalf, and Green Bay.

A first-round pick plus is the going rate for star WRs right now (see Tyreek Hill to Kansas City and A.J. Brown to Philadelphia), and the Packers could offer that. Although, there are also two young Packers wide receivers on the team’s roster right now in Romeo Doubs (Round 4, No. 132) and Christian Watson (Round 2, No. 34) who are intriguing and might entice Seattle more.

Using one of these players, who have at least shown a little in the preseason of what they can do in the NFL, could be more interesting to the Seahawks.

There is an almost zero percent chance this will happen this year, but Green Bay fans can certainly dream about the possibilities of DK Metcalf on the Packers roster for the final few seasons of Aaron Rodgers’ career. 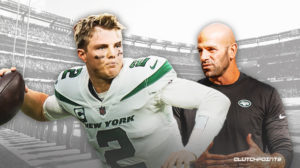