The Green Bay Packers received discouraging news on wide receiver Allen Lazard on Friday ahead of their season opener against the Minnesota Vikings. Lazard did not practice and he is listed as questionable for the game. The wide receiver was asked about his status later on Friday, to which he gave a rather cryptic responseper Matt Schneidman.

Lazard may simply have no desire to give a straight-forward answer to the media. But his response certainly leaves little room for optimism. Many players are quick to share hopeful answers in response to injury-related questions. But Allen Lazard’s cryptic answers will leave Packers fans guessing ahead of Week 1.

It was reported that star offensive lineman David Bakhtiari also missed Friday’s practice. His questionable status for Sunday leaves the Packers in a difficult spot. There will be a ton of pressure on quarterback Aaron Rodgers if both Allen Lazard and David Bakhtiari can’t play. They are both vital pieces of the Packers’ offensive attack.

However, nothing has been confirmed. Both players are questionable and still could suit up on Sunday against the Vikings. We will continue to monitor the Packers concerning injury situations ahead of their season opener in Minnesota. 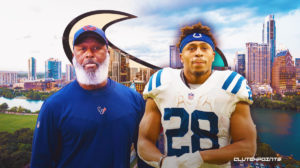