Manchester United sent out a statement of intent to the rest of the Premier League with a dramatic comeback victory against Manchester City.

A local derby which was already rich in sub-plots delivered plenty of drama, especially in the second half when Jack Grealish’s opener was overturned by Bruno Fernandes’ controversial equaliser and then Marcus Rashford’s close-range winner.

Why Man United’s equaliser was allowed to stand

The biggest controversy at Old Trafford revolved around United’s equaliser in the 78th minute.

Why was Bruno Fernandes’ goal allowed to stand against Manchester City?

Casemiro’s pass over the top looked intended for Marcus Rashford’s darting run forward, but the striker was clearly in an offside position when the ball was played. 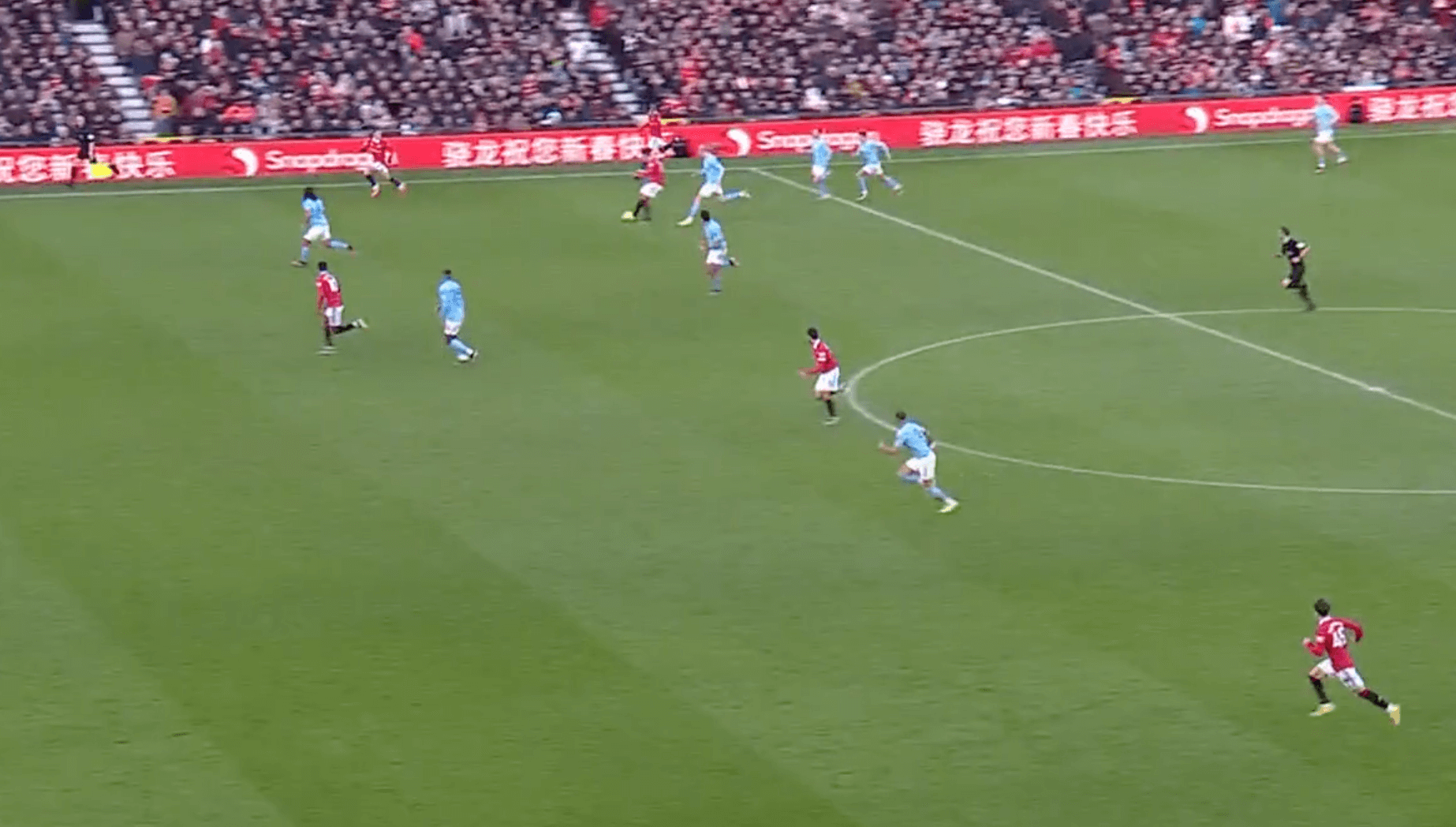 However, Rashford never touched the ball as it fell into his path; instead, he allowed the onside Bruno Fernandes to strike it home. 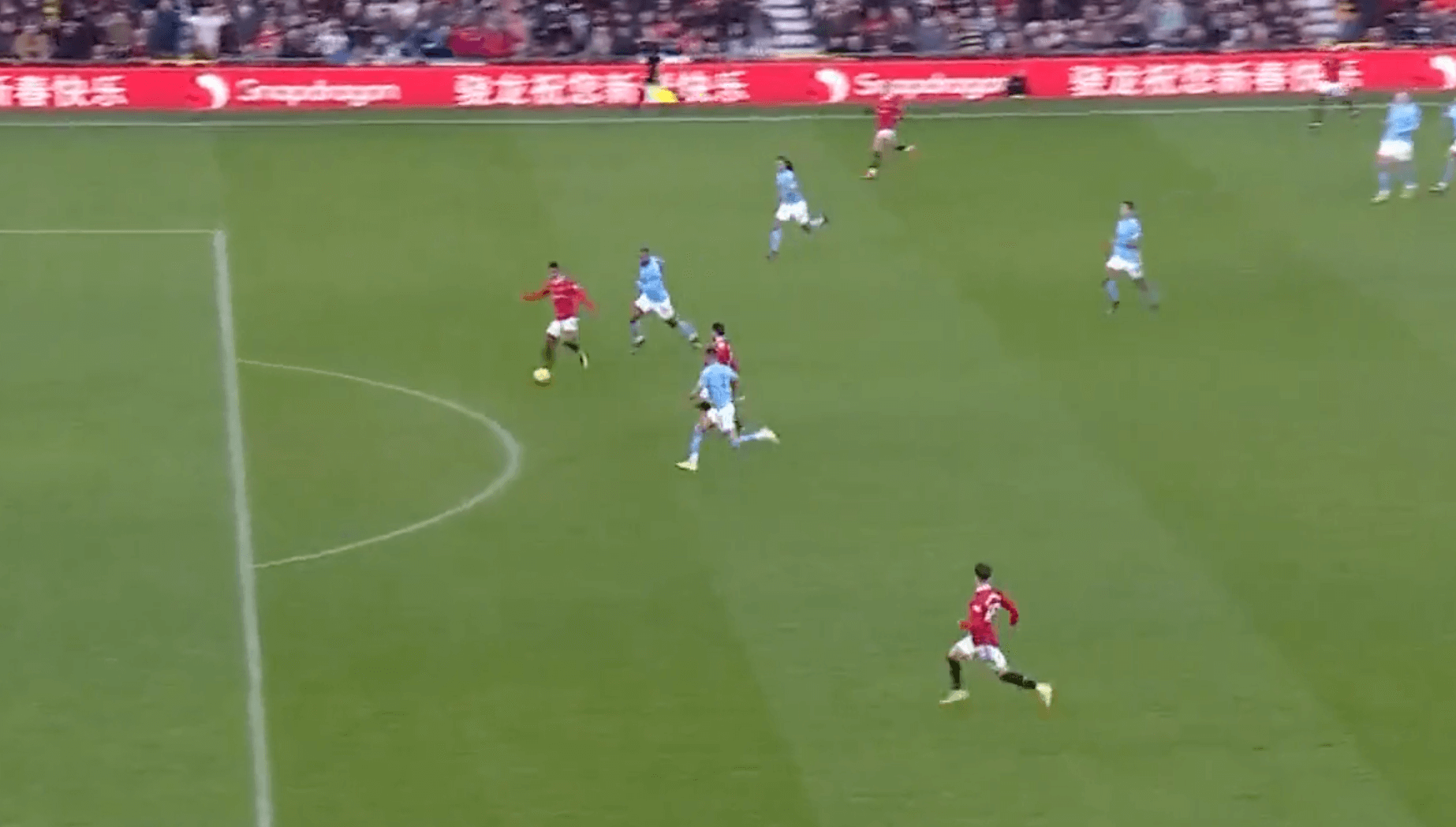 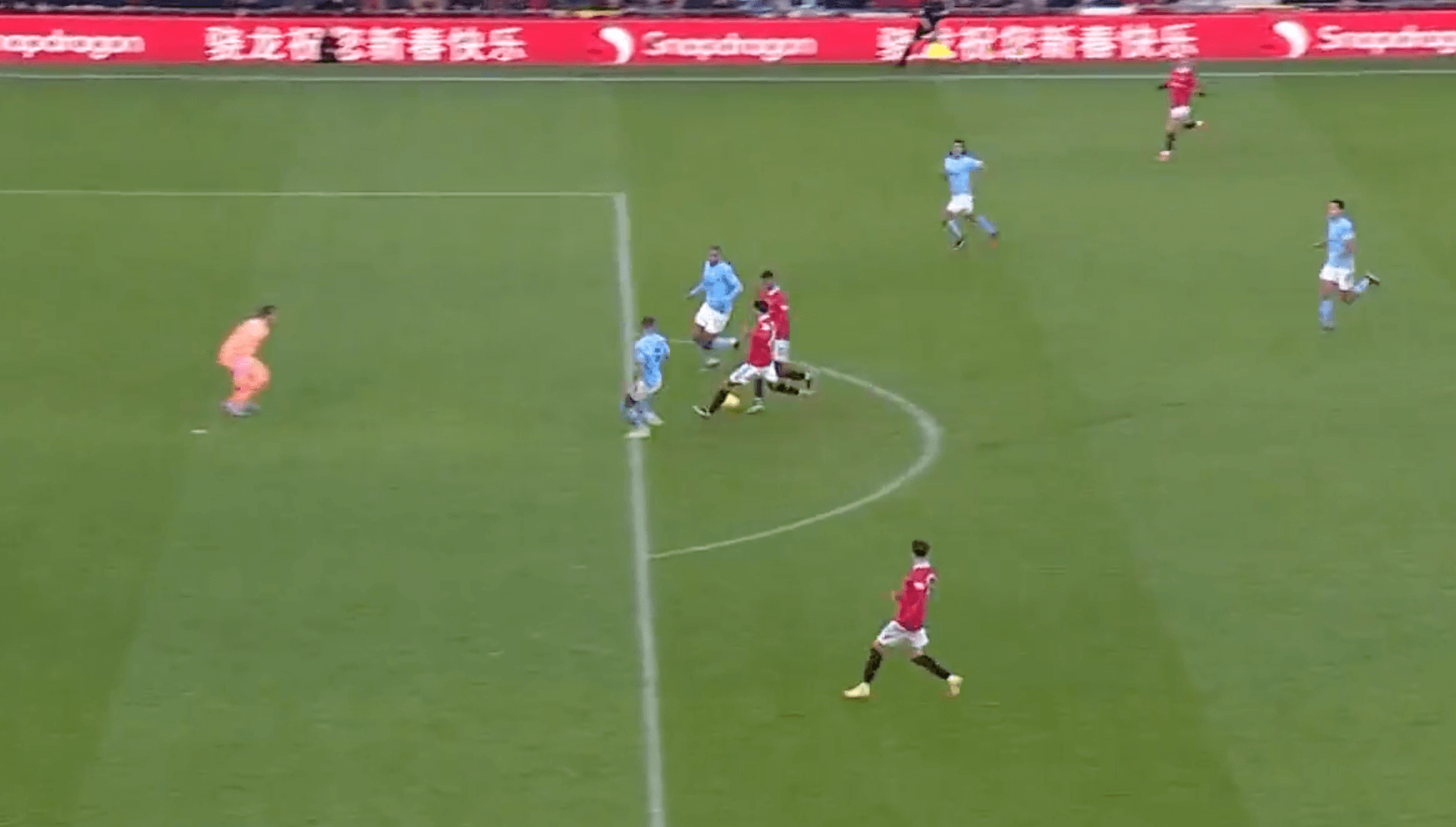 Fernandes’ celebrated and immediately protested his case to the assistant referee, and Scott McTominay — who was being readied for substitution — threw his arms up in protest on the touchline.

So, was it the right decision? Casemiro’s pass was surely intended for the offside Rashford, but the Englishman’s choice to not touch the ball allowed the game to play on and Fernandes’ goal to stand.

Although Rashford did not touch the ball as the assistant referee initially believed, there is an argument he was so close to the ball and City’s players that he was interfering with play. Rashford’s run shielded the ball from at least one defender and created a situation where Ederson could not come off his line to collect Casemiro’s pass.

But former Premier League referee Peter Walton on BT Sport said he did not believe Rashford interfered with play, and ultimately the officials agreed. City, it is fair to say, did not.

After Bruno Fernandes’ equaliser went in, Pep Guardiola was spotted pointing to his temple on the touchline. He was reminding his players that for all the controversy surrounding the goal, they now had to retain focus.

Four minutes later, they were behind. It is a familiar pattern, one that City supporters have come to know during the Guardiola era. For all the unprecedented success, there are short, sharp moments when everything collapses in on itself.

Think of the three goals in six minutes in the Champions League semi-final against Real Madrid last year. The two in three minutes against Tottenham in the 2019 quarter-finals. The three in nine against in defeat at Anfield in 2018, which ended the long unbeaten record of eventual Centurions.

Before Fernandes’ leveller, City were dominant and in the ascendancy but have had to learn the hard way over the years that they are almost never safe.

Perhaps that is part of the reason behind Guardiola’s push for a greater sense of tactical control, which has provoked such debate around his selections and arguably contributed to a tepid, unimaginative first half display.

And yet despite that push for control, City are still capable of suddenly and irrevocably losing it.

It is six goals in six game for Rashford, who is arguably the Premier League’s in-form player – some transformation for someone whose future was being openly debated in Manchester (and well beyond) last season.

The 25-year-old had a strange first half, unable to convert two decent chances before keeling over with what looked to be a hip or upper leg issues. He persisted in the second half eventually moving to centre-forward after a brief experiment with Antony up front.

Ultimately he had the crucial say in how this dramatic game ended, with his goal and offside “interference” for the equaliser evidence of his counter-attacking threat. But there are newer tools to his game as well. His left foot has improved, so has his heading and passing.

Team-mates are trusting him with the ball more and he is playing with such confidence he isn’t taking an additional touch to steady himself for shots if he trusts himself to test the keeper early.

Fernandes finished the game with the man-of-the-match award, but his embrace with Rashford at full-time showed who is the talismanic figure of this United side in early 2023.

Jack Grealish does not score many. He never has, really. The most expensive player in Premier League history’s personal best for a single season is a grand total of 10 in the 2019-20 campaign for Aston Villa.

Grealish’s harshest critics have therefore always had a clear, obvious deficit in his game to point to: a lack of end product.

To build their defence, his fiercest supporters have always had to delve into the realm of more advanced statistics: progressive ball carrying, penalty area touches and the like. It’s not as persuasive an argument. 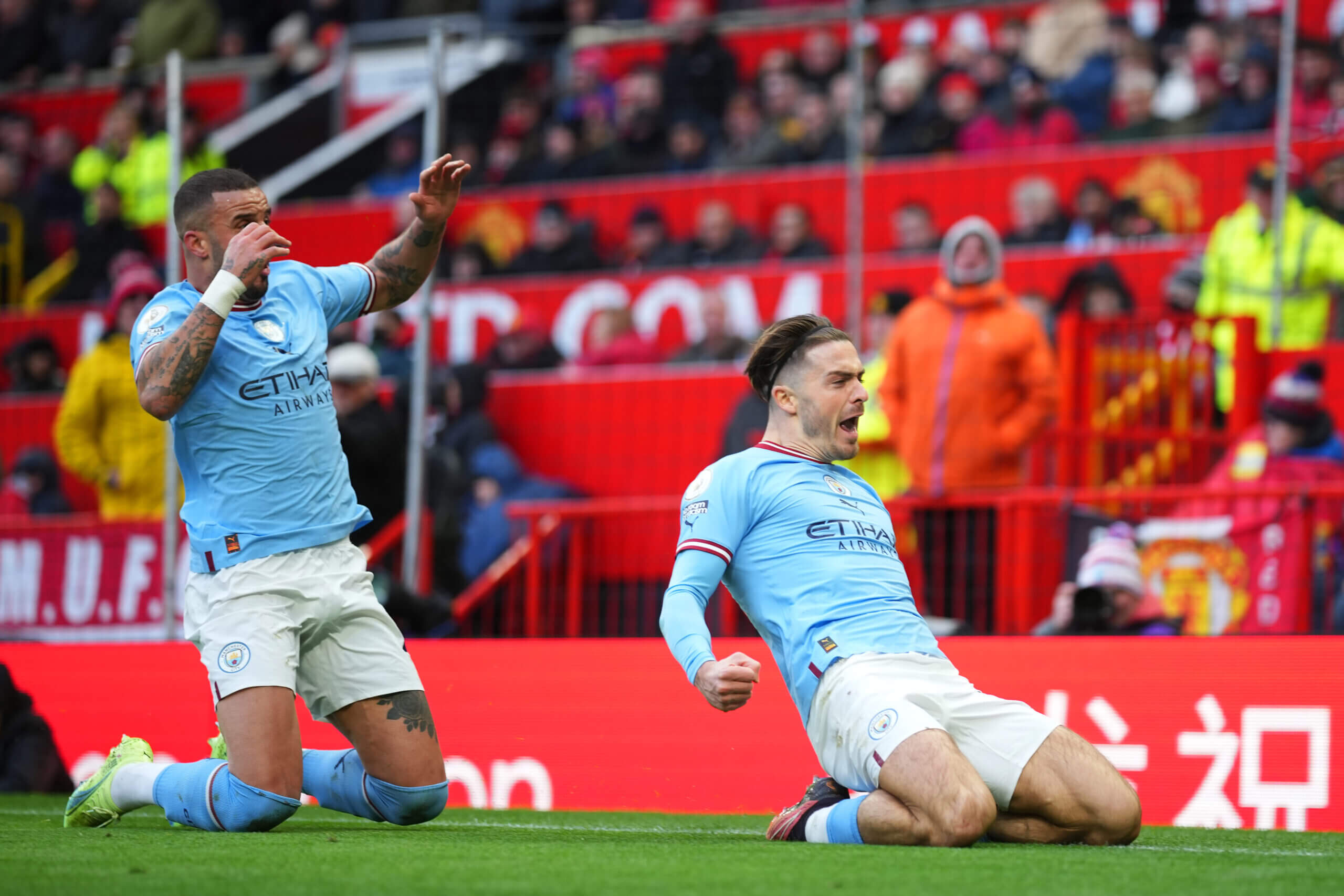 But what can be more persuasive than a goal in a Manchester derby, undoubtedly the biggest of Grealish’s City career to date? For the second Premier League game, and once again away to a ‘Big Six’ club, his introduction had a tangible impact, even if ultimately Grealish left Old Trafford as frustrated as any of his team-mates.

Still, Grealish’s last five appearances have brought a goal and three assists. That is not bad for a £100million player with a lack of end product.

United’s line-up may have raised a few eyebrows, with Fred joining Casemiro in the midfield pivot while Fernandes went wide on the right and Christian Eriksen started as the 10. But it brought about an out-of-possession performance from United that ranked among their best in recent seasons.

Eriksen’s job was to follow Rodri closely and prevent an easy means for City to build from the back, while Fred followed De Bruyne like a shadow. The Brazilian’s energy and appetite for a loose ball had him outmuscle De Bruyne — there were two standout occasions in the first 20 minutes which had the Old Trafford crowd roaring their approval — and his left foot brought a balance to United’s passes out from the back that Ten Hag often craves. 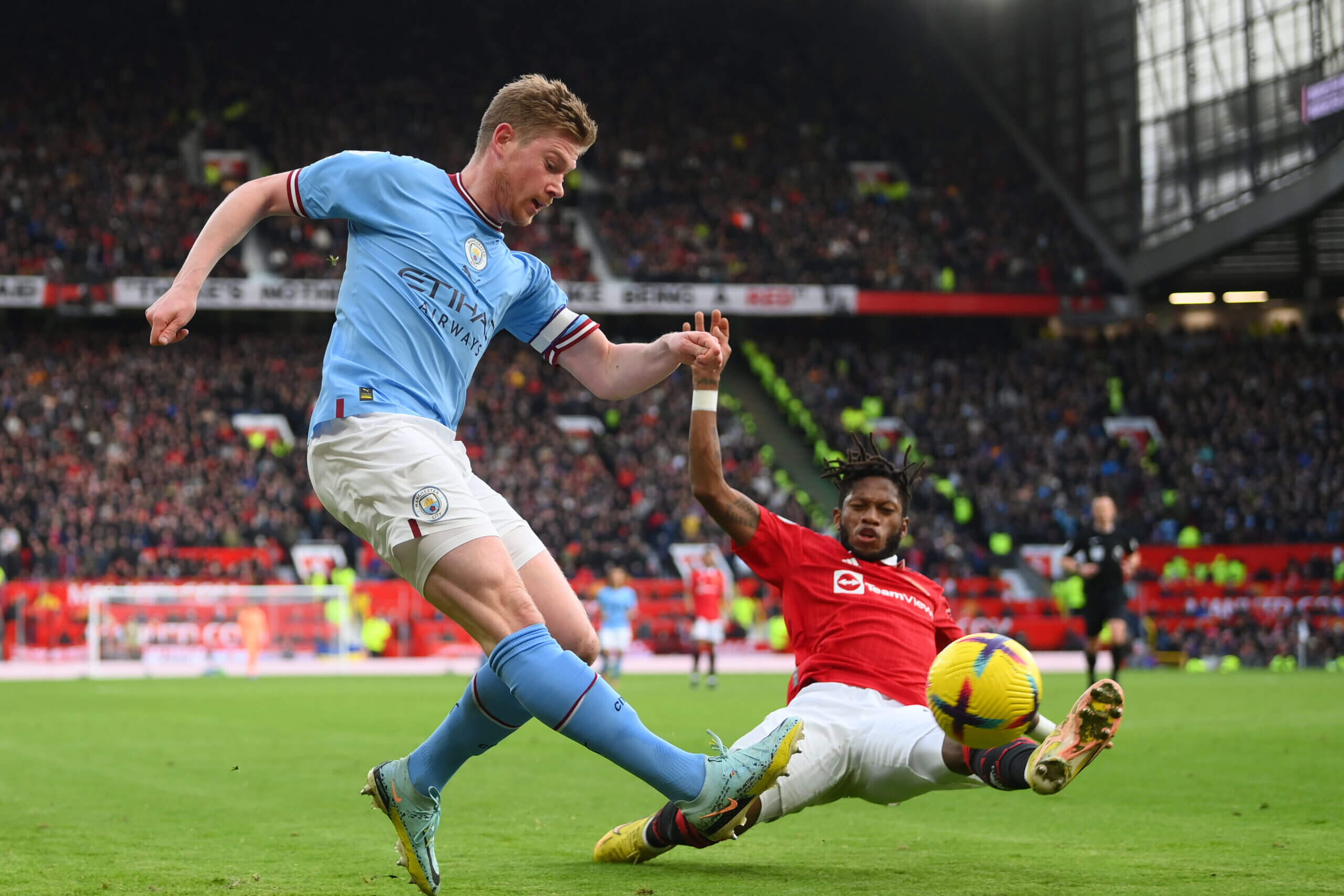 Fernandes and Rashford then tracked City’s wide men with an intensity and depth that United do not always manage in big games.

It squeezed the air from City’s midfield and left Pep Guardiola’s side looking flat: some contrast to the game between the teams earlier this season, when United were 4-0 down by half-time.

So what changed in the second half? Injury to Anthony Martial meant United no longer had a focal point for the moments they did win the ball. And as legs tired, De Bruyme found more pockets of space on both sides of midfield.

Fred’s lockdown job could not last forever, and the introduction of Jack Grealish, allied to a knock to Rashford which seemed to hamper the England international, meant there were more runners for United to track from midfield. City duly took control for a time, until United’s late comeback swung momentum once again.

Haaland forced deep… to no avail

If you had to predict where this Manchester derby would be won and lost based on the team sheets alone, the prospect of Erling Haaland lining up against left-sided centre-back Luke Shaw felt likeliest.

Only it never really transpired. Instead, Haaland was often spotted dropping deeper than we are used to seeing, with the vast majority of his touches in the first half coming nearer the halfway line than the 18-yard box. 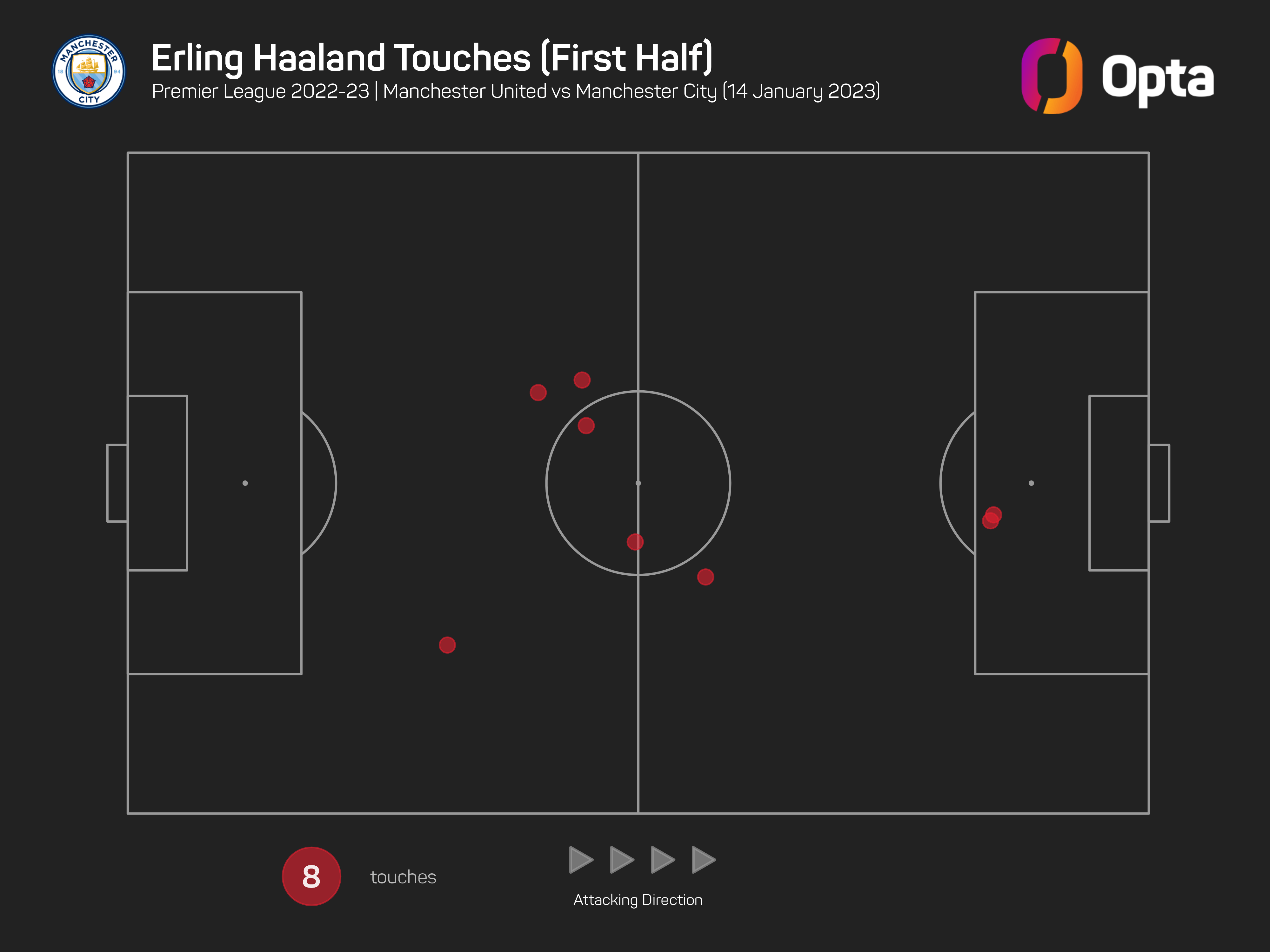 If the idea was to bring him into the game more, it did not work. Haaland spent so much of his time uninvolved in the play that he presumably picked up on the chants of “Keano, Keano” sent his way by Old Trafford.

Perhaps this was the compromise Guardiola felt he had to make: play the ‘destabilisers’ everyone wants to see but change Haaland’s role to maintain an element of control.

It was another tactical micro-tweak of many seen at City recently and another that did not pay off, and it took the half-time interval for Guardiola to fix the problem. In the second half, Haaland pushed further up and City were able to exert more control, until the last mad few minutes at least.

Anthony Martial was a late inclusion in Ten Hag’s starting XI, having done enough to convince United’s medical staff and management that he had overcome a late issue with his leg on Friday to make the team.

The 27-year-old (admit it, you thought he was younger) had a strange first half against City, and certainly did not look fully fit. In the opening 10 minutes, he didn’t put his best effort into staying onside for a potential counter-attack then, shortly after, he failed to close down Ederson when the City goalkeeper had to deal with an awkward backpass. Throughout, his running pace was somewhere between a jog and a pained sprint. 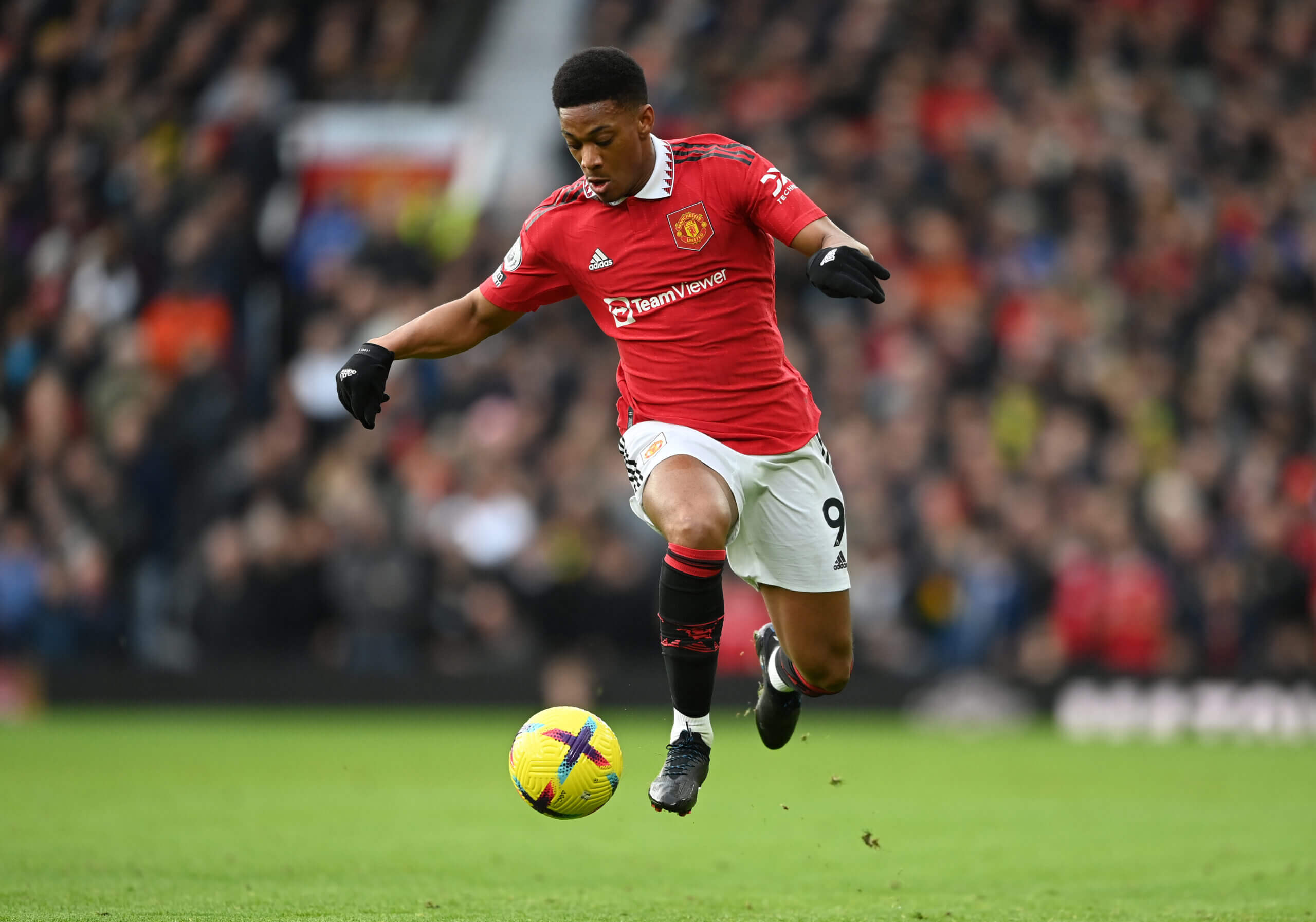 Anthony Martial was forced off at half-time (Getty Images)

Martial’s first touch, passing intelligence and back-to-goal game make him essential to Ten Hag’s attacking plans, but the United coach has admitted the striker cannot handle the “physical load” of three 90-minute performances in a week and he was replaced by Antony at half-time.

It was unfortunate timing for the French striker, given new signing Wout Weghorst was present at Old Trafford on Saturday. There has to be a good chance that the Dutchman will play more Premier League games than Martial come the season’s end.