By Zack Steele, For The Tribune

BIRMINGHAM — Thursday night, Hewitt Trussville made the short trip down Old Springville Road to take on a familiar foe in the Huffman Vikings. Hewitt was looking to rebound from a stinging 17-7 loss to Hoover last weekend. Huffman provided the perfect opponent to clean up the offensive miscues that plagued the Huskies a week ago. 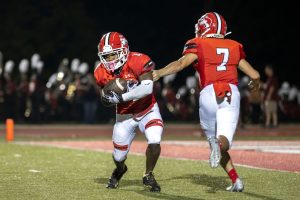 Hewitt won the toss and deferred to the second half. Huffman took the opening kickoff and immediately went 3 and out. This would become a recurring theme for the Viking offense.

After a Huffman punt, Hewitt needed only four plays to find the endzone, with Kennedy Mitchell scoring on a thirteen-yard scamper. Rigg would add the PAT, and it was 7-0

After a second consecutive three and out, Hewitt would take just 3 plays to score, this time with Peyton Floyd hitting Kadius Barnes for a 21-yard touchdown pass. Rigg converted the point after, and Hewitt led 14-0.

The third consecutive 3 and out for Huffman would this time lead to a 9-play drive that finished up with a tight end drag route a la Auburn in the 2010 Iron Bowl, with Donovan Price doing his best Phillip Lutzenkirchen imitation. Hewitt’s lead ballooned to 21-0 after the Rigg PAT.

Huffman would pick up a little momentum and two first downs on their next drive but would be forced to punt back to Hewitt.

Hewitt again was on the move. This time Floyd would find Jaden Loving for a 10-yard score. Rigg added the point after, and the Huskies were cruising.

Floyd would find Loving again with 8 minutes to go in the half, giving the Huskies a 35-0 lead after the PAT.

After another stalled Huffman drive, Floyd would find Barnes once more to chalk up his 5th touchdown pass…of the half.  The PAT made it 35-0.

Hewitt would get it back once more before the half. And Melton would waste little time, sprinting to the end zone for a 45-yard touchdown. After Rigg’s PAT, it was 49-0 at the half.

Peyton Floyd finished the first half, and the game for that matter, 16-18 for 166 yards and 5 touchdown passes.

Hewitt’s defense would allow 44 total yards in the first half, holding Huffman to 1 of 9 on third down.

Hewitt emptied the benches in the second half. Huffman would add a touchdown late in the third quarter to make the score 49-8 after a two-point conversion. That would be the final.

In a halftime interview, Head Coach Josh Floyd was pleased with his team’s focus.

“We came out tonight and bonded after last week. We needed it,” Floyd said. “It’s good to get our starters some rest and get some fresh faces out here who work hard all week.”

The win improves Hewitt to 4-2 on the season. Next week, Hewitt travels to take on Thompson in a game with huge playoff implications.