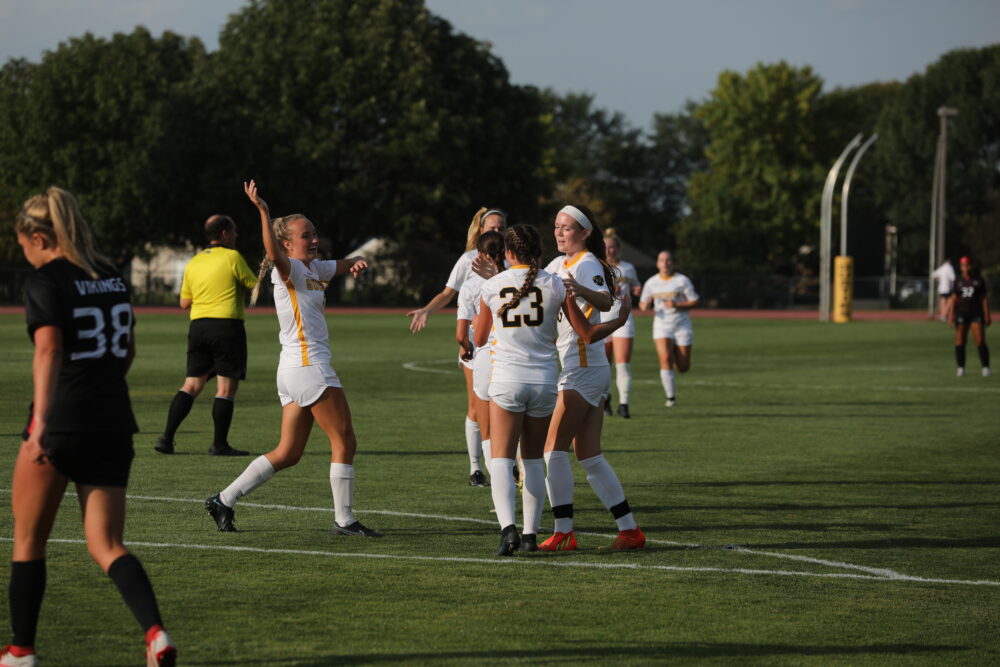 SAINT PETER, Minn. — It had been 25 years since the Gustavus women’s soccer team started its season with three consecutive wins.

That all changed this Wednesday, as the Gusties dominated Bethany Lutheran by a score of 6-0 in their 2022 home opener.

The scoring started early in the first half, as Lauren Rocheford (Fy., Inver Grove Heights) picked up her first collegiate goal off of a pass from Molly Waters (Sr., Lakeville) just one minute into the game.

Cambelle Waldspurger (Fy., Mahtomedi) would add the second of the game and the third of her career — and third in as many games — just one day after being named MIAC Women’s Soccer Offensive Player of the Week.

And the Gusties would not stop there.

Lillian Selberg (So., Minneapolis) netted the third goal of the game, off of a pass from Alexis Lin (Albuquerque, N.M.) for Selberg’s first goal of the year and Lin’s first collegiate point. Gabby Rodriguez (So., Waseca) rounded out the total at four in the first 45 minutes — equaling the Gusties’ total goals on the season, in just the first half.

The Gusties would go on to add two more tallies, one from Jordan Oelkers (So., Byron) — a collegiate first — and the final blow off the foot of Annika Lewis (Sr., Hudson, Wis.) for her first goal of the season.

The trio of Gustie goalkeepers split the shutout, with Abby Goodno (Sr., Little Canada) facing the Vikings in the first half, followed by shutout performances from Claire Hemstock (Jr., North Mankato) and Justine Holm (Sr., Shakopee), with Holm facing all three of the Vikings’ shots on goal.

“Today was a super fun game and team win. It was incredible to play all 31 players while maintaining control of the game,” said Coach Laura Burnett-Kurie on her team’s convincing performance. “We wanted to start strong, focus on the little details and continue to build our trust and interchanging positions on the field.”

The Gusties are back in action Sept. 9, for a 7 p.m. away contest against Dubuque, followed by another non-conference showdown against UW-Eau Claire on Sept. 11.