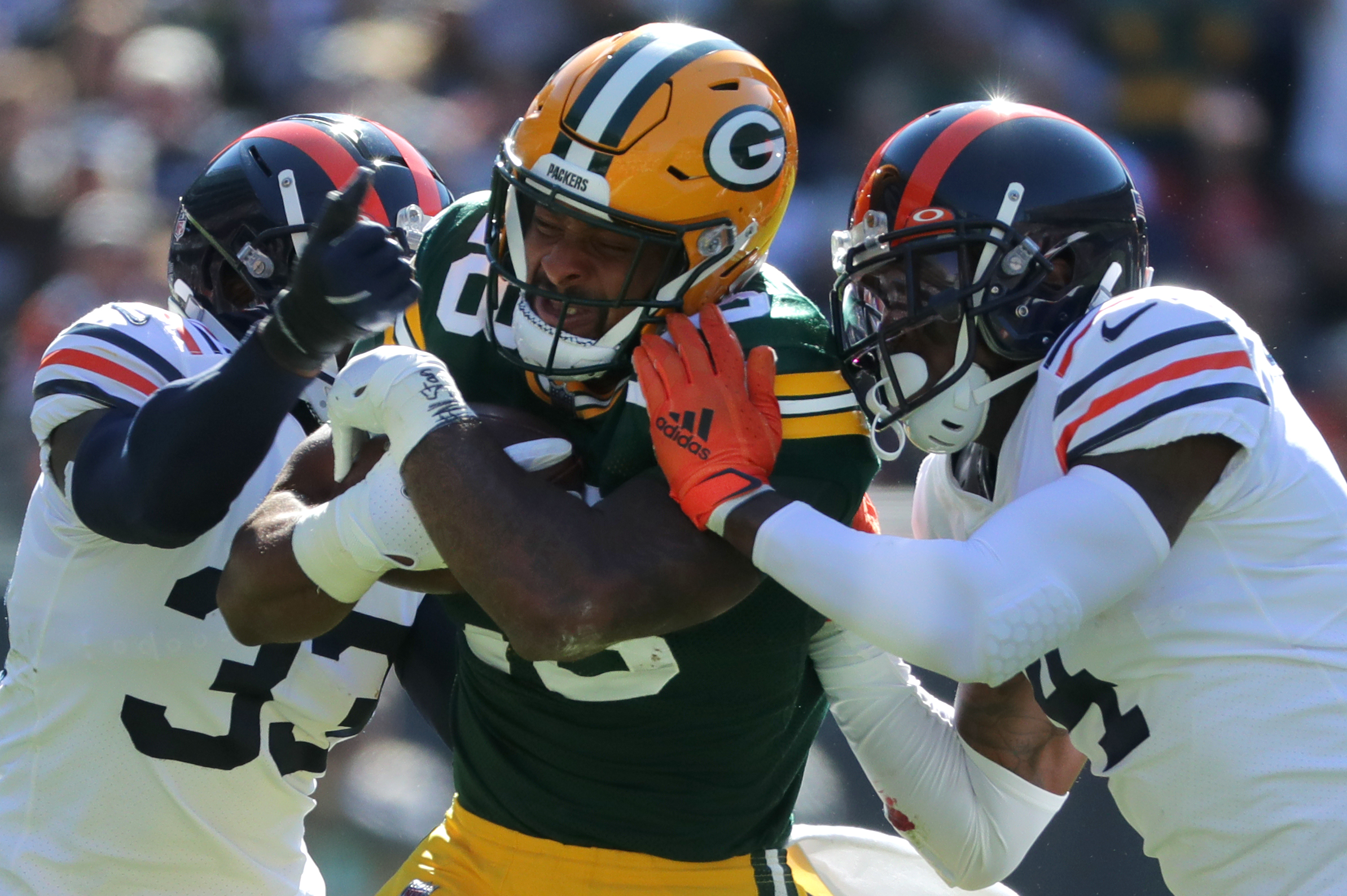 QB Aaron Rodgers: The reigning MVP of the league doesn’t seem to be a fast starter in his late 30s. Rodgers has now struggled in back-to-back opening weeks, completing 22-of-34 passes for 195 yards and an interception. It’s better than his output he had to open the 2021 season, but Rodgers was nowhere close to his MVP levels. He likely has an axe to grind and gets to take out his frustration on the Bears, a team he knows all too well. But with injury questions surrounding multiple offensive position groups, is he closer to another dud of a performance than we might think? — Brendan Sugrue

RBs Aaron Jones and AJ Dillon: If the Packers offense is going to get back on track, it will be because of their pair of running backs AJ Dillon and Aaron Jones. The running backs are integral to their offensive success, both in the ground game and through the air. Dillon saw the lion’s share of the carries last weekend against the Minnesota Vikings, rushing 10 times for 25 yards and the game’s only touchdown. Jones carried the ball five times for 49 yards. Dillon was also the leader in receptions and yards for the day. Rodgers will most likely try to get his backs going again and stopping them will be key to a Bears victory. — Brendan Sugrue

WR Allen Lazard: It remains to be seen whether or not wide receiver Allen Lazard will make his season debut this weekend after missing the opener against the Vikings with an ankle injury. Given that he’s practiced two days in a row, however, his chances are getting better so let’s assume he’s suiting up for week two. Lazard is Green Bay’s new WR1 following the departure of Davante Adams. He had a career year in 2021 with 553 receiving yards and eight touchdowns with his big and length frame. If healthy, Lazard should be the priority for the Bears pass defense. — Brendan Sugrue

DL Rashan Gary: Defensive lineman Rashan Gary could be a problem for the Bears interior offensive line. Gary has continued to get better and better each season he’s been in the league. He had a career high of 47 total tackles and 9.5 sacks in 2021 and has already gotten off to a hot start this season. Gary had seven total tackles, one for loss, and one sack on the d Kenny Clark is going to get most of the attention on the defensive line, but Gary could be the more dangerous player on Sunday evening. — Brendan Sugrue

CB Jaire Alexander: The Packers secondary is led by cornerback Jaire Alexander, regarded as one of the best in the NFL. Alexander and the Packers defense were torched by Vikings receiver Justin Jefferson last weekend, however. The star pass catches had nine catches for 184 yards and two touchdowns and toyed with the secondary all day long. Alexander wasn’t shadowing Jefferson, but perhaps he should have been. The All-Pro corner was solid in coverage when targeted, but that wasn’t often. Perhaps Alexander follows Darnell Mooney for much of the night but wherever he plays, he’s someone the Bears need to keep an eye on. — Brendan Sugrue