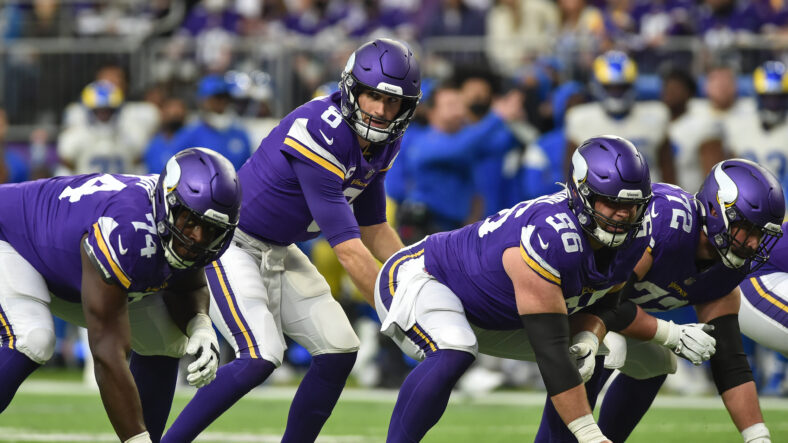 Minnesota Vikings fans are accustomed to statistics and grades like this:

This stat from January illuminated Minnesota’s pass-protection woes, spanning four years and perhaps eight if one considers “17th” less than desirable. Every season, the Vikings embarked on a new slate of 16 or 17 games while fans held high hopes “this time would be different.”

Implementing a new coaching staff alone inspired hope for change, and if Week 1 was a decent indicator, the Vikings might be on the right path. At U.S. Bank Stadium last weekend, Minnesota suffocated the Green Bay Packers, 23-7, in a rare display of dominance of the Aaron Rodgers-led Packers. Everything about the game and subsequent win felt different — even the offensive trenches.

The Vikings weren’t total gangbusters upfront, nor were Kirk Cousins’ passing pockets pristine. But the OL performance was betterand that’s the important part.

Pro Football Focus identified the mini-surge, too. It published Week 1 OL rankings, and the Vikings climbed five spots from #19 to #14 in one week. PFF wasn’t enamored with the unit, though, instead offering criticism on how Minnesota can improve. Sam Monson of PFF wrote, “Bradbury looks just as much of a liability under the new regime as he did in the old one, surrendering four pressures against Green Bay last week.”

He also tabbed rookie Ed Ingram, a player in his first-ever game on Sunday, as someone who can plan better, stating Ingram “suffered his own issues, and that interior axis remains a concern for the Vikings.”

Still, the Vikings fivesome upfront performed better than most games inside the Mike Zimmer era. And for a unit playing together for the first time — against a fierce Packers defense — Vikings faithful were encouraged.

These were the Vikings individual OL grades from PFF versus the Packers:

Life doesn’t get easier for Minnesota as it travels to Philadelphia on Monday night. Sharp Football Analysis called the Eagles defensive line the NFL’s fourth-best heading into the 2022 season.