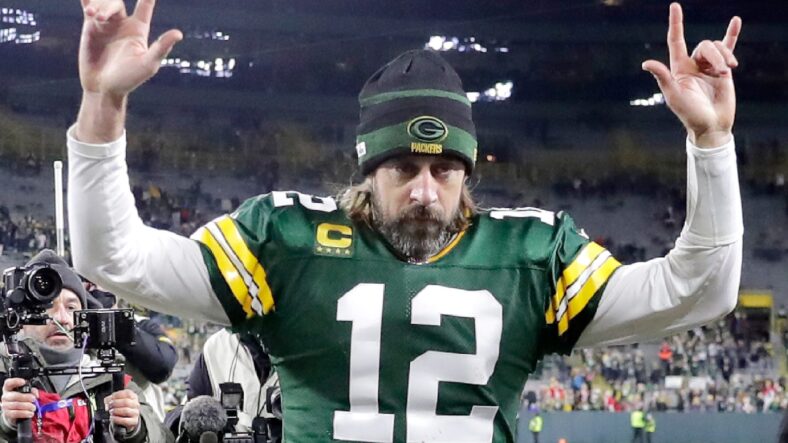 There’s no denying that confidence is a trait any NFL quarterback must possess. Competing at the highest level every week against the best in the world requires razor-sharp focus and self-belief. Aaron Rodgers has that, but his tone-deaf remarks may leave him exposed in 2022.

As the Minnesota Vikings prepare to host their divisional rival, the Green Bay Packers, on Sunday afternoon, the barbs have begun to fly back and forth between the two organizations. New Minnesota edge rusher Za’Darius Smith noted a change in interaction from his former team following an injury-laden 2021. Conversely, Aaron Rodgers stepped up to the mic yesterday and wasted no time announcing his presence as presider over the NFC North.

Rodgers said“All the other teams in the NFC North, it seems like every single year, I think their fanbase and their teams feel like, ‘This is our year to win the North.’ Hasn’t really been the case during my time, for the most part.”

He’s absolutely not wrong, as the Packers have reigned supreme. Since 2011, Green Bay has finished outside of first in the division just three times.

History aside, it’s clear where the comments from Green Bay’s quarterback are directed. No one in their right mind thinks the Detroit Lions are winning the NFC North, and the Chicago Bears biggest victory may be landing the number one overall draft pick. Coming into Minnesota, Rodgers is talking to a Vikings squad reinvigorated with a coaching staff that will look to exploit talent riddled throughout the locker room. It’s still fair for Rodgers to take a “show me” attitude, but this season could be his most challenging yet.

We have seen little indication as to whether number one wide receiver Allen Lazard will take the field on Sunday. Even if he does, and despite Rodgers suggesting there may be no drop-off, the difference between Lazard and the since-departed Davante Adams is canyon-like. Behind him, Sammy Watkins is hardly the talent he once was, and Randall Cobb is closer to receiving an NFL pension than continuing to catch footballs.

Obviously, one of the main bugaboos for Minnesota last year was their lack of ability in the secondary. This group of wide receivers should allow them a nice opportunity to settle in. They’ll be tested by one of the best quarterbacks ever to play the game, but the pass catchers should present little reason to assume a mismatch through the air.

While Rodgers is focused on winning the division for another season, someone may want to ask him how the competition has treated his efforts in getting to and winning a ring. The mushrooms this offseason have likely long worn off by now, but that can’t be something he’s forgotten.

Ted Schwerzler is a blogger from the Twin Cities that is focused on all things Minnesota Twins and Minnesota Vikings. He’s active on Twitter and writes weekly for Twins Daily. As a former college athlete and avid sports fan, covering our pro teams with a passion has always seemed like such a natural outlet.