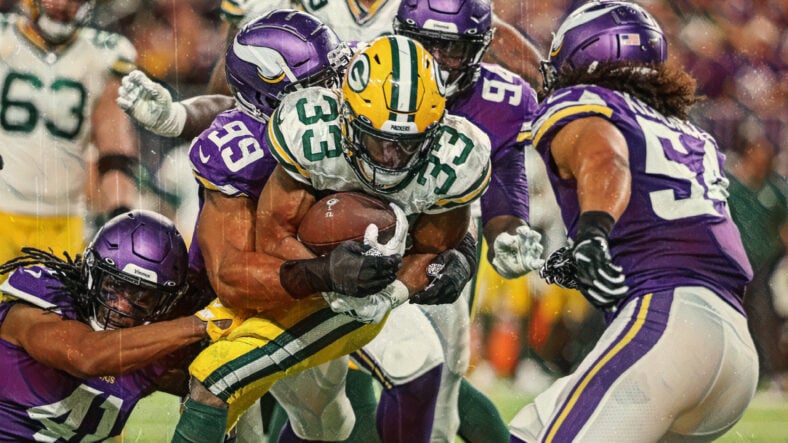 3 Packers the Vikings Must Contain in Week 1

In the most anticipated season opener since Brett Favre took his first Vikings snap in Cleveland in 2009, the Minnesota Vikings will host the Green Bay Packers on Sunday afternoon to kickoff the 2022 season.

This iteration of the Green and Gold looks slightly different from the squads that won 13 games in each of the last three seasons: Za’Darius Smith is now wearing purple, Davante Adams is now catching passes from Derek Carr, and David Bakhtiari may not be ready to play in Week 1.

Nonetheless, Green Bay, led by Aaron Rodgers and stalwart defense, is still a 1.5-point favorite on the road against its division rival. For Minnesota to beat the Packers at US Bank Stadium for the second straight year, there are three Packers they must contain.

Despite being the lesser acclaimed “Smith Brother,” Preston has actually had a statistically more prolific career than Za’Darius. Additionally, in 8 career games against Minnesota, Preston has 5.5 sacks, 9 QB hits, and six tackles for loss; the Vikings ever-changing offensive line has had a hard time slowing the lanky pass rusher down [1].

Although Minnesota seems to have found its mainstays to bookend its offensive line in Brian O’Neill and Christian Darrisaw, there are still many uncertainties on the interior. Green Bay will look to line up their best, Smith, fellow OLB Rashan Gary, and Kenny Clark, against Minnesota’s worst, Garrett Bradbury or rookie Ed Ingram, to create mismatches.

Minnesota’s new offensive attack, if it all reflects on Kevin O’Connell’s 2022 Rams’ approach, will be predicated on quick throws designed to create yards after the catch, which should help neutralize Smith’s ability to get to Kirk Cousins. But if the aforementioned shaky offensive line can’t contain the “elite” Green Bay defensive line in the run game, Preston Smith and his versatility could wreck Minnesota’s offensive game plan.

With the departures of Adams and Marquez Valdes-Scantling to the AFC this offseason, Green Bay’s wide receiver room is thin, to say the least. Alan Lazard and Sammy Watkins highlight a group that doesn’t have anyone shaking in their boots.

Now, Aaron Rodgers has the ability to get the most out of his receivers, but there will be some growing pains early on in the season. Lazard and Randall Cobb are the only receivers with considerable reps alongside Rodgers, and of the seven WRs on the depth chart, three are rookies.

All that to say, the Packers will rely heavily on their established rushing attack with Aaron Jones running behind a formidable offensive line to control time of possession and keep the potent Vikings offense on the sideline. With Jones certain to be a focal point in Matt LaFleur’s game plan, it will be up to Minnesota’s new and improved defensive front to slow him down.

If history has any say in the matter, Jones will have a sizable impact on the game’s outcome. Since Jones entered the league in 2017, he has missed three of Green Bay’s ten games against Minnesota. The Packers are 0-2-1 in those games, including the Vikings’ last two wins in the series. When Jones does play, his team is 4-3, winning the previous four times. Furthermore, in Green Bay victories, Jones has four total TDs and averages 98 scrimmage yards. In losses, those numbers shrink to 1 and 49, respectively [2].

It’s not a coincidence that two of Green Bay’s most dominant defensive linemen are on this shortlist. Vikings’ center Garrett Bradbury put on weight in the offseason to help him withstand power rushes from the likes of Clark, but training camp hasn’t given Vikings fans much solace in his ability to do so. Newly acquired defensive tackle Harrison Phillips reportedly pushed him around at will throughout the summer.

If the Vikings aren’t able to stop Clark without a double team from Bradbury and one of the guards, there will be more opportunities for the likes of Gary or Smith to wreak havoc. So even if Clark doesn’t have a large statistical impact on the game, his presence will be felt unless Bradbury can slow Clark on his own.

Historically, Clark has had some of his strongest statistical showings against Minnesota: 6 of his 22.5 career sacks have come in the Border Battle. However, there is a strange negative correlation between the games that Bradbury has played and Clark’s performance. In Clark’s seven games against Minnesota that Bradbury has not played in, Clark has six QB Hits, five TFLs, and four sacks. In the five games Bradbury has playedthose numbers shrink to 2, 1, and 2, respectively [3].

Either Bradbury has been able to neutralize Clark, or Minnesota has had to provide extra support for Bradbury in blocking Clark, leaving other Green Bay defenders to accumulate the stats. Either way, the former first-round pick will need to hold his ground against number 97 in white. If he can’t, it will be a long day for both him and Minnesota’s offense.

Will is a husband, father of two, and earned an undergraduate degree in Economics (just like Kwesi Adofo-Mensah). He became a Vikings fan in 2009 when Brett Favre stole his heart. Will’s favorite pastimes are water skiing, Minnesota sports, and Cinnamon Toast Crunch. He is the co-host of the Load the Box Vikings Podcast with Jordan Hawthorn. Follow him on Twitter (@willbadlose) and find his other sports content at Twins Daily and his very own Bad Loser Blog.