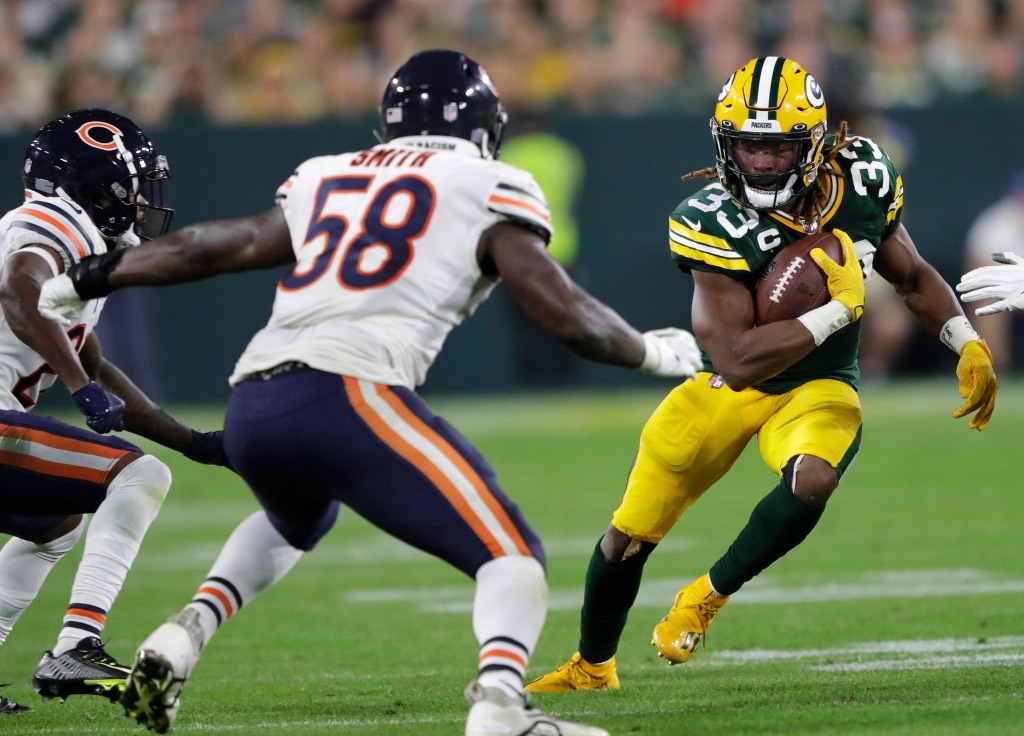 All is right with the world, once again.

In a tale as old as time, the Green Bay Packers took it to the Chicago Bears in prime time at Lambeau Field.

How can you not love that?

There are definitely some things that need to be cleaned up, but it’s good to get the first win of the season out of the way. So let’s get into the stock report for the Green Bay Packers after a 27-10 win over Chicago in Week 2.

Elgton Jenkins- I do not care that he looked rusty in his first game back. I do not care that it wasn’t perfect. What I do care about is the spark that Elgton Jenkins provided to the offensive line and the offense in general. After the game, Matt LaFleur gushed about Jenkins in his return, stating that the Packers would not have won that game without him. That’s a big compliment, especially for a guy who has hardly played the right tackle position. Reminder: it was his first game back from injury. He’ll get better, and more confident, every week at the position. Buy.

Aaron Jones/AJ Dillon- I could’ve just said “buy the run game,” but that’s not as fun as writing down both names of the Packers’ standout running back duo. Yes, Aaron Jones was the big star of the night – and rightfully so (15 carries, 132 yards, 1 TD). However, A.J. Dillon actually rushed the rock more times than Jones (18 carries), and provided a nice ying to Jones’ yang. Heavy doses between the slasher and the bulldozer will keep a defense on its toes. This is the future of this offense and this team. Gone are the days of Rodgers throwing 40+ times a game. Here to stay is this duo and the run-first style of offense that can win football games.

Preston Smith- Preston Smith? Might as well just call him Mr. Consistent. Smith was all over the field on Sunday, posting 7 total tackles, 3 QB hits and 2 sacks. A leader on the defense, Smith isn’t always the most splashy, flashy player on the field. But he just does his job night in and night out. He’s a disciplined player, capable of rushing the passer and stopping the run. (Just don’t ask him to cover Justin Jefferson – I kid, I kid). In all seriousness, the Packers will need Smith to continue his solid play for the rest of the year. And I’m betting that’s what he’ll do.

Royce Newman- Admittedly, Royce Newman did play better at the right guard position than his attempt at right tackle a week ago. However, he is consistently one of the worst graded offensive players every week, and needs to show some growth at the position. He’s an okay option, but I’m just not buying that Newman is the right guard of the future for this team.

Darnell Savage- Last week, I put Adrian Amos’ performance on sell. This week, it’s his partner in the defensive backfield who I’m disappointed with. Savage struggled in week one, but he was noticeably worse in week 2. He’s always been above average against the pass, but the area of his game that needs improvement right now is his tackling. He struggles in run fits and misses tackles often. Savage is an athletic freak, but he’ll need to be better if this defense is going to reach its full potential.

Special teams- Don’t look now, but the Packers special teams is gaining some positive momentum. It’s definitely not a ‘buy’ yet, but the Packers “we-fense” played much better in Week 2 against the Bears. No blunders on the field goal unit, kickoff and punt coverage did its job and, heck, Amari Rodgers even had a 20-yard punt return! As nice as this is, I refuse to get too excited about the positive play of special teams. We’ve been here before. This unit will need to do it consistently, week in and week out, before I get too enthusiastic. For now, hold.