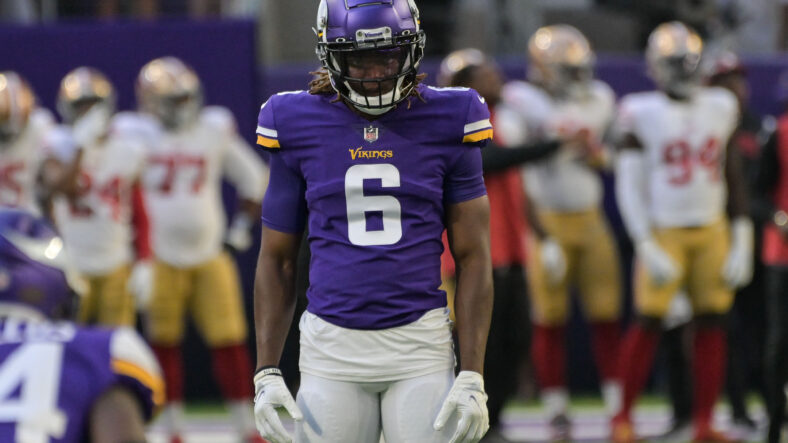 The Minnesota Vikings are lucky to have two “other” good safeties at the back end of Ed Donatell’s defense because rookie 1st-Rounder Lewis Cine may not play versus the Green Bay Packers.

Cine was listed as questionable on the Vikings final Week 1 injury report.

Drafted by Minnesota with the 32nd overall pick in April, Cine hasn’t gripped the starting job opposite Harrison Smith during the summer. Instead, second-year safety Camryn Bynum headlines the depth chart, with Cine as his backup.

Cine reportedly aggravated “an old injury” to his knee late this week, casting his rookie debut into doubt. Meanwhile, Minnesota called upon Myles Dorn from the practice squad to play if Cine is a no-go. And that transaction should indicate Cine is more likely to sit than play.

Dorn joined the Vikings in 2021, contributing substantially to special teams in Mike Zimmer’s final season. He played about 55% of the time on special teams, and more such snaps may be on the docket Sunday against the Packers.

The possibility of Cine missing Week 1 is a continuation of a lukewarm summer for the Georgia alumnus. First-rounders are expected to snatch starting jobs sooner than later — that’s why they’re drafted in Round 1 — but Cine has not done so. Bynum, on the other hand, seized the moment last year as a rookie, especially in his first game versus the Baltimore Ravens, and his fascinating story continues.

Thankfully, because Minnesota employs Smith and Bynum, Cine isn’t necessarily required for the Vikings to pull off the mini-upset over its most hated foe. When Cine is healthy, expect the Vikings to mix in his skillset as part of three-safety sets. If he doesn’t see the field Sunday, Dorn and Josh Metellus will fill such assignments.

Cine made headlines in May, appearing on teammate Patrick Peterson’s podcast All Things Covered and referencing his bloodthirsty approach to football. Peterson asked if there was one player he was excited to hit, and Cine replied, “I don’t have one person in particular. My head is, I just want to stack bodies. That’s it.”

There’s still a chance Cine could begin the body count against Green Bay, but a more sensible bet is Week 2 or 3.

With or without Cine, the Packers are favored by 1.5 points to defeat the Vikings.